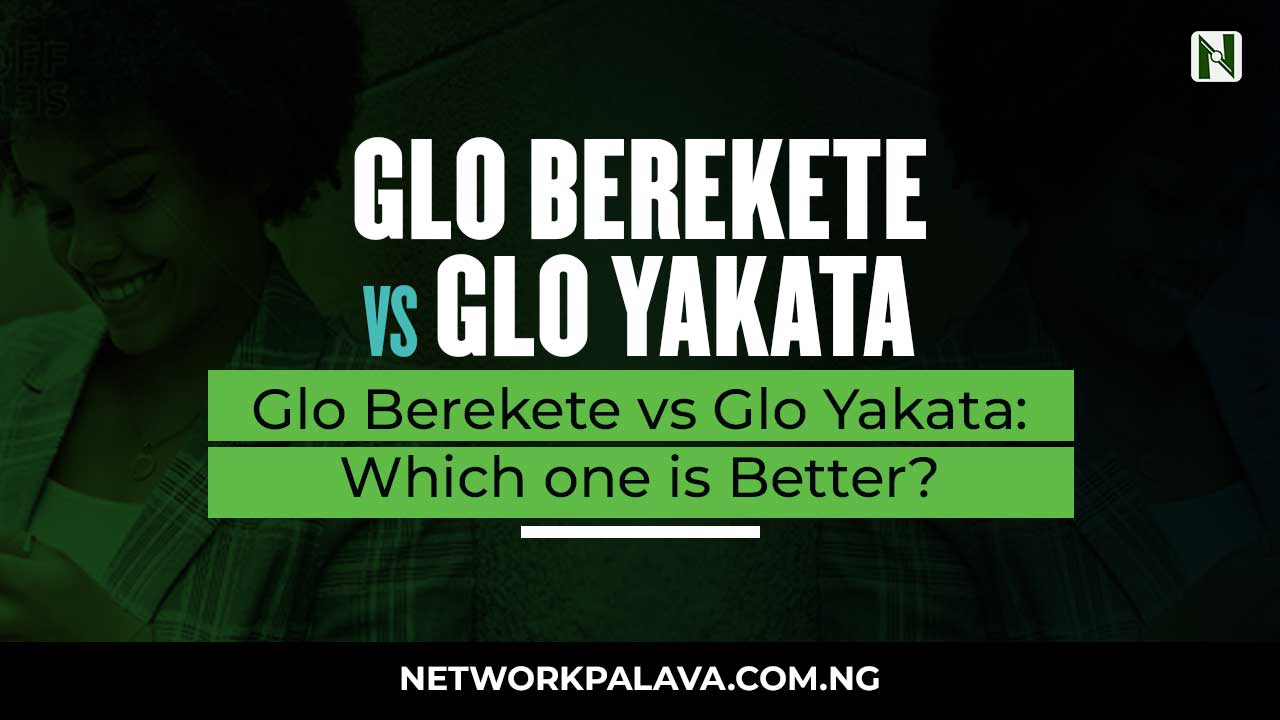 Glo Berekete vs Glo Yakata: This post on NetworkPalava explains what you must know about Berekete and Yakat tariff plans on the Glo network.

To make it easy to understand, you’ll know the difference between Glo Berekete and Glo Yakata plan in a few minutes.

Glo Yakata, the default tariff plan for new Glo users, was replaced by Glo Berekete as the default plan on every freshly activated SIM card once upon a time.

Although both Yakata and Berekete provides voice and data benefits, so which is better?

About Glo Berekete versus Glo Yakata

This section explains how Glo Berekete and Yakata work. So, if you’re unfamiliar with these tariff plans, read carefully.

Every recharge on Glo Berekete 10X includes a 400% voice bonus and a 500% data bonus, both of which are good for 7 days.

These bonuses, together with the amount recharged, total ten times the value of what was recharged. The voice bonus can be used to call any network.

Glo Yakata is a standard prepaid tariff plan that provides you with voice and broadband bonus whenever you reload your prepaid line.

Prior to the introduction of Glo Berekete, it was the Glo default prepaid tariff plan.

Every recharge on Glo Yakata, starting at N100, provides you call, data, and voice bonus worth 22X the amount recharged. All bonus last 7 days and can be used to phone any network.

On data plans, you can additionally get up to 6GB of data bonus per month. This promotion is only valid for 6 months after SIM activation.

The good news is that both new and existing Glo customers can reap the benefits of Glo Yakata simply by switching from their current tariff plan to the Yakata tariff plan.

Let’s jump right into their comparison now that you know what Glo Berekete and Yakata are.

The table below shows the benefits of Glo Yakata and Glo Berekete tariff plan:

Because Glo data plans are not tariff-based, both the Glo Berekete and Yakata tariff plans provide the same data volume for the same price.

Glo Berekete, on the other hand, gives new users an extra 100% data on every data purchase they make for the first four months.

Please keep in mind that the data bonus you receive has no effect on the price.

Glo Berekete vs Glo Yakata – Who Is Eligible?

Before you even consider the benefits of these Glo tariff Plans, you must first determine whether you are entitled or eligible to use them.

What Is Common On Both Tariff Plans?

We can’t compare Glo Yakata and Glo Berekete without mentioning their commonalities.

See what is common between Glo Yakata and Berekete below:

Glo Berekete vs Glo Yakata: Which is better?

Glo Yakata, the default tariff plan for new Glo users, was replaced by Glo Berekete as the default plan on every freshly activated SIM card once upon a time. Which is superior, although both provide voice and data benefits?

A summary is provided in the table below:

Now, considering the difference, which one is better? Leave a comment.

Considering on-net and all-net call rates of 55 and 70 Kobo/sec, respectively, plus 70 Kobo/sec from the bonus account.

With N100 airtime, you may make calls for 5 minutes 57 seconds to 6 minutes 40 seconds on Glo Yakata.

Finally, you can decide whether Glo Berekete 10X is superior to (or better than) Glo Yakata. You are aware of your options and the specific tariff plan that is suitable for you. So, activate your desired tariff plan.

FAQs – Yakata vs Berekete on Glo

What is Yakata on Glo?

Glo Yakata is a new juicy package offered by Globacom Nigeria to new and existing Glo customers as the telecommunications business aims to continuously develop unique solutions that deliver value for money.

Which of the Glo plan is the best?

I don’t think there’s any tariff plan labeled ‘BEST’ on the Glo network. You just have to pick the one that suits you and go with that. At NetworkPalava, our job is to explain how tariff plans work, then you decide.

Is Glo Yakata the same as Glo 22X?

Glo 22X is a prepaid package that gives you fantastic broadband and voice bonus whenever you refresh your Glo line. While Glo Yakata is a standard prepaid tariff plan that provides users with voice and broadband bonus whenever they reload their prepaid line.

Glo Yakata vs Glo Berekete is two tariff plans that are well-known for their amazing data and voice advantages. The essence of the post is to show you the benefits of each tariff plan so you can decide and pick one.

To wrap it all up…

Glo Berekete: This tariff plan, called Glo Berekete, is available on the Glo network. It is also known as the default prepaid tariff plan, which offers voice and data benefits to users who reload their prepaid lines.

The Glo Yakata: Every time a prepaid line is recharged, Glo Yakata, a special tariff plan, rewards consumers with voice and data bonus. Before Glo Berekete was introduced, Yakata was the default prepaid tariff plan for Glo.