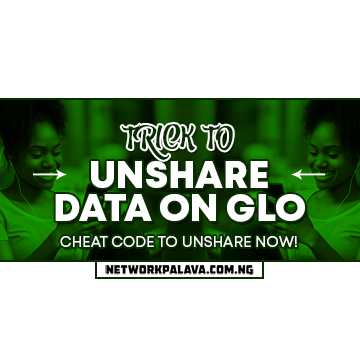 I know you’re searching for how to unshare data on Glo Network. This is the only guide you need to say bye to that.

Maybe in a situation where you’ve been sharing data with a friend for a long time and you’re like;

Enough is enough, I don’t want to share my glo data again.

That’s one point. What if you gifted data to someone by mistake and the recipient refuse to send it back or it can’t be reversed.

No worries, today you’ll get the ussd code to unshare your data on glo in a few seconds.

As I explained in my previous post about glo data sharing, this service allows you to share your mobile internet data bundle with someone else on the Network.

It can be your friends, family members, colleagues, or even strangers (lol).

This data-sharing service can be very useful in rare situations. Now, what if you want to unshare data on your glo line, how will you do it?

How To Unshare Data On Glo

There are two major ways to stop sharing data;

Below is the code to unshare data on glo:

Yes, if you’ve followed my guide on how to share your MB on Glo, you must have known by now that to make this possible, you need to add the list of numbers you want to share data with.

Now, the plan is to remove the numbers that you’ve added and that’s the code to unshare glo data fast.

You can also remove numbers you’ve shared and currently share data with through the Messaging App installed on your phone by default.

After that, the phone number you just removed will no longer have access to your data unless you share it with them again.

Learn How To Activate Glo Night Plan 100 For 1GB Code

There are two things involved data sharing or data gifting.

Data Sharing means giving someone else access to browse with your existing internet data bundle. That is, you bought the data from glo officially and now you’re sharing it with someone else with the same validity or expiry period.

Learn How To Share Airtime On Glo Network Faster.

Data Gifting means buying data for someone else from your glo line using your mobile phone. Hope you get it now?

Here are the answers to all the most asked questions on unsharing data on your Glo line.

How Do I Check Shared Data Balance On Glo?

Do You Know How To Transfer Data On Glo?

You can choose one of the methods I shared above. Yes, share your existing data or gift data with someone.

People also asked if it’s possible to share glo data with mtn number. Well, at the moment, you can only share data on glo to glo line.

How Do I Unshare Data On Airtel?

How Do You Check Who Is Sharing Your Data On Airtel?

You can share data with any other Airtel number you want. Just keep your transfer PIN private to avoid theft. That is, to prevent someone else from stealing your data without your consent.

Do You Get It Now?

If you followed my guidelines step-by-step, to stop sharing data with other glo numbers won’t be a problem anymore.

So, after trying this code, what’s the result you got?

Yes, that’s how to unshare data on glo right now.